Selenium vs Cypress: The Ultimate Showdown 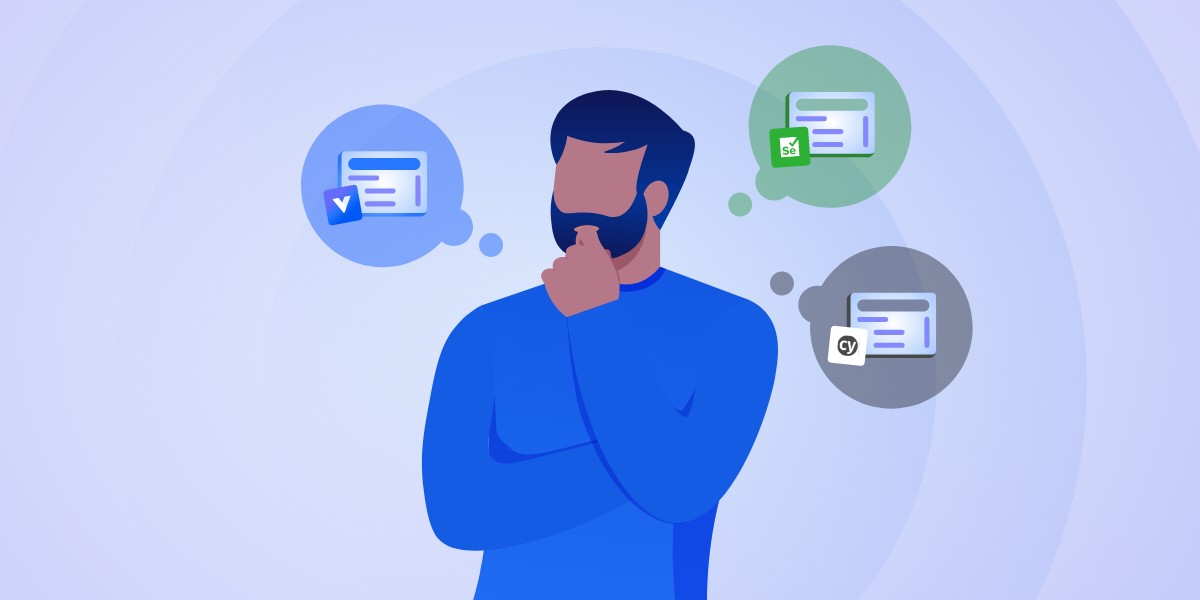 Cypress is rising in popularity, so let’s compare it to the traditional framework choice: Selenium.

There are so many testing tools out there that it’s hard to know which one is right for the job. Today, we’ll be looking at two of the most popular testing frameworks out there: Selenium and Cypress. Both platforms are powerful, but each has its advantages and disadvantages, so we’ll go over what’s at the core of each platform and their main differences.

Selenium is a free, open-source tool for test automation that's been the industry standard in automated testing for almost twenty years. One of the main appeals is its customizability; you can add any integrations to perform a wide range of tasks from mobile browser testing to visual regression testing. If a type of testing exists, there's likely a tool for Selenium out there. Because the documentation is maintained by the testing community, it's not perfect, but it does the trick.

Selenium consists of three different parts: the WebDriver, which is the framework that allows you to execute cross-browser tests, the Grid, which is used to run tests in parallel, and the IDE. The IDE is not only used to write the test steps, but it also supports parallel testing, and it records, plays back, and saves test steps. However, the IDE isn’t quite top-notch; it’s a good tool to get you started, but it’s best to export the code to another IDE to refine and run it there.

Cypress is another open-source, end-to-end testing framework, but this one is newer to the world. Released in 2014, Cypress is maintained by a dedicated team (cypress.io) and the community can contribute, so the documentation is in tip-top shape. There's only one part to Cypress: just one package to download. You need to make sure that there's a package.json file ready or a node_modules folder, but otherwise, there's only one part to download.

It uses a DOM manipulation technique and executes tests directly on the browser without drivers. The core of its focus is on frontend testing, though it is possible to execute API tests, it just takes some more finagling. The main goal of Cypress is to make testing easier for developers who still want to use frameworks.

Main Differences Between Selenium and Cypress

With two different frameworks, it can be challenging to compare and contrast them properly and know exactly what's different. The main difference is that Cypress’ goal is to introduce developers to testing, but let's drill down into the nitty-gritty of advantages and disadvantages.

For a framework that works off of code, one of the main advantages is that it's compatible with all the main coding languages. Do you like Python? Java? Ruby? You can take your pick! Same with which browsers you can test on. All major browsers are supported, including Safari. API testing is also built-in and easier to format.

Since Selenium has been around since 2004, some think that if it ain't broke, don't fix it. Well, not really. A lot of things have to be manually added to Selenium, like video recording, wait times, and taking snapshots. If an element takes a while to load, that can throw a wrench into the testing. The main issue is that it takes a while to author the tests due to the very specific language required. Often, it goes: author, execute, test failure, and repeat.

As mentioned before, the documentation for Cypress is incredible since it's mentioned both by the company and the community. It also takes snapshots of the testing steps so testers can see exactly what happens at each point in testing without an integration. Cypress also automatically waits for commands, assertions, and load times.

Sadly, Cypress is JavaScript-specific, so if you don't know JavaScript already, this could dissuade you from using it if you're not keen to learn a new coding language. Granted, a lot of people know JavaScript, but what about people who are new to the coding world and decided to start with learning something a bit more "user-friendly" like Python? Another disadvantage is that Cypress doesn't support testing in Safari browsers, and they have limited support for iFrames, which can be frustrating for testing some forms.

In the end, both are good tools; it just depends on what your testing needs are and what your testing team looks like. But as far as frameworks go, Cypress might be pulling into the lead. However, frameworks aren’t the only name in the game: there’s also codeless test automation. Yup, here comes the pitch, but hear me out. See that cool chart up there comparing Cypress and Selenium? Well, Virtuoso’s codeless test automation stacks up pretty well. We support all those testing types (and more), we have awesome documentation, a dedicated Customer Success team to help users, a passionate DevOps team to handle maintaining the tool and keeping it up-to-date, we take snapshots automatically for each step, and we support all browsers (and devices). Lots of testing goodness there, and it’s always the right tool for the job! Check out a free, no-strings-attached demo at a time that works best for you.