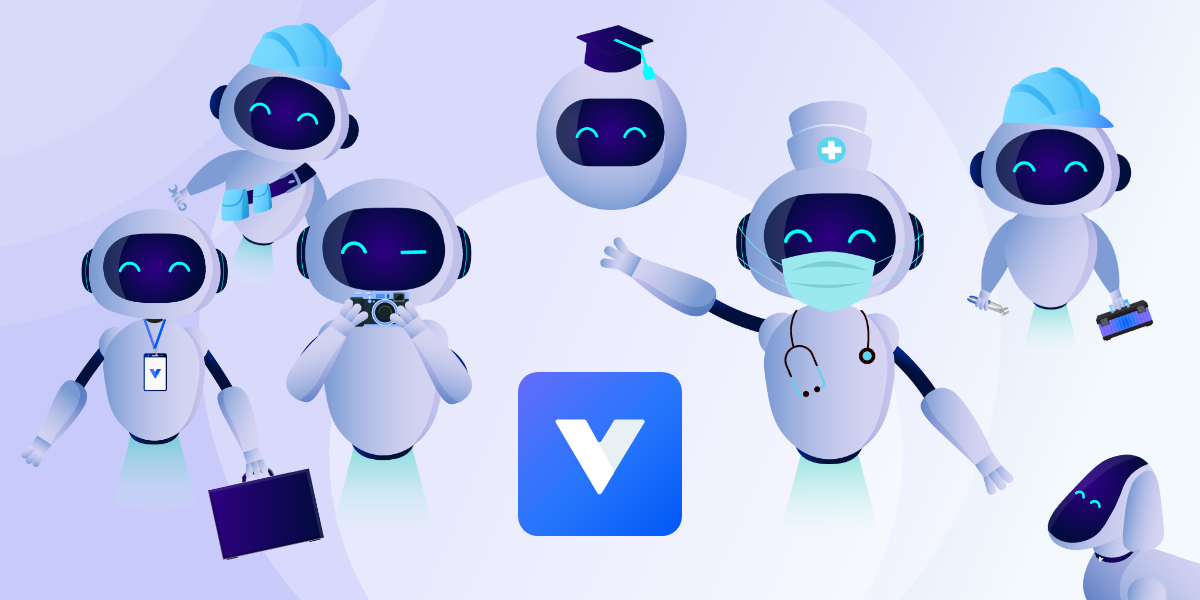 They’ve got interests from video games to weightlifting, so come meet them to find out who’s taking care of your testing!

Have you seen our new line of bots? They’re so excited to be here and help Virtuoso work intelligently for you! We’ve selected only the best and the brightest in their fields, and they can’t wait to meet you. So here are their official introductions!

Up first is D0c, our bot in charge of test authoring. Isn’t he cute? Well unfortunately, when he was little(er), the other bots would tease him because of his lack of arms. He couldn’t do assembly work, transportation, or any traditional robot activities. Poor D0c would spend a lot of time by himself, so he started to read, devouring more and more books until he was accepted to the top bot university, Botford. He graduated top of his class with PhDs in Thinking Like a Human, Translating from Human to Robot, and Human-Robot Relations. D0c was quickly recruited by Virtuoso to translate the plain English entered by users into precisely-worded NLP so the tests know exactly what they’re doing. He fits in great with the other bots that work here, and when he’s not on the clock, he’s reading and listening to podcasts on niche topics.

Next is Ann3! She’s pretty no-nonsense, so when her parents named her Mechannic, she decided to shorten her name to Ann3. She started out in a rather unorthodox direction - she’s a retired weightlifting champ! That might sound like a silly sport for robots to have, but they measure their weights by tons instead of pounds or kilos. However, she decided to retire and started automating her heavy lifting with RPA instead. Virtuoso loved her work and offered her the position of making sure that tests were executed properly, and she jumped at the opportunity. She tends to be a bit of a drill sergeant, but all the tests know that tough love is her love language.

The tests feel especially supported and loved by the bot that makes sure that they’re all feeling right as rain, Cl4rence. Cl4rence grew up as the oldest of a large bot family, so he was always taking care of his younger siblings. This led to his interest in nursing, so he worked his little bot butt off to graduate from nursing school! Now he takes care of all the little tests, fixing anything that gets broken and making sure they’re ship-shape and not brittely-fashioned. He also tends to be a bit of a mother hen to the bot team and always makes sure that there’s a plate of homemade cookies in the break room. As a result, every Father’s Day he’s flooded with cards from the tests as well as his bot buddies!

But what would be the point of all this hard work if you didn’t have someone to report the results? That’s where S1mon comes in! Bringing a Bachelor’s of Simplistic Statistics to the table (along with a minor in Button Clicking), he’s obsessed with making aesthetically pleasing graphs, charts, really anything that organizes data. Virtuoso’s dashboard is his pride and joy, and he loves to make sure that everything is easy to read at a glance. S1mon’s briefcase makes him feel very important, but since all his work is digital, it’s actually full of assorted and interesting keycaps from keyboards. He also loves fidget toys that have buttons, especially fake bubble wrap.

Visual regression is a feature that we’re constantly going on about, and C4meron is the bot that handles that! She got onto Virtuoso’s bot radar with the five different Instagram accounts she manages with themes ranging from cottagecore to wanderlust, and she’s got a wonderful eye for digital detail. She’s definitely the most extroverted of the bot team, always upbeat and never without a compliment for whomever she meets. During her downtime in the break room, she likes to draw on her tablet, usually landscapes or picturesque villages. But while she works, C4meron’s comparing baseline snapshots of websites to make sure that not a pixel is out of place unauthorized. She’s an uncanny knack for that kind of detection, so those games where you find the difference between two pictures is a breeze for her.

Now, Glady5 is the programmer of the group. She picks up coding languages like they’re nothing, her favorites being Python, Java, and C++. Glady5 is also an avid gamer bot. She loves a classic FPS like Halo and Call of Duty or a good puzzle game like Myst (and yes, she thinks with portals), but she’s currently obsessed with Plasmophobia. Her two hobbies blend together quite nicely, and she enjoys flexing her coding muscles (or circuitry) by coding her own video games. You’ll never catch her without a screen in her hand! Virtuoso needed someone techy for end-2-end testing, and Glady5 tends to nerd out easily, so she was the obvious choice to watch over API testing!

Our last bot, but certainly not the least of the bots, is the adorable Budd1! Budd1 doesn’t have a specific Virtuoso function, but he’s the emotional support animal for the rest of the bots. He lives in the break room, rotating between several different beds just for him or the bot’s laps. The poor little guy grew up in an alleyway, so he’s extra affectionate. But luckily, he caught the digital eyes of the bot team when they were headed home one day. They immediately adopted him, because who could resist that sweet face? Funnily enough, Budd1 also makes a mean cup of coffee.

And there you have it! These are our bots, and they form an incredible team! They love their work, so they’re on call 24/7 whether you’re writing a simple UI test, running visual regression tests, or diving into the belly of the API beast. How about getting a little demo? Come check out their hard work!