Manual vs Automated Testing: Which Is Better? 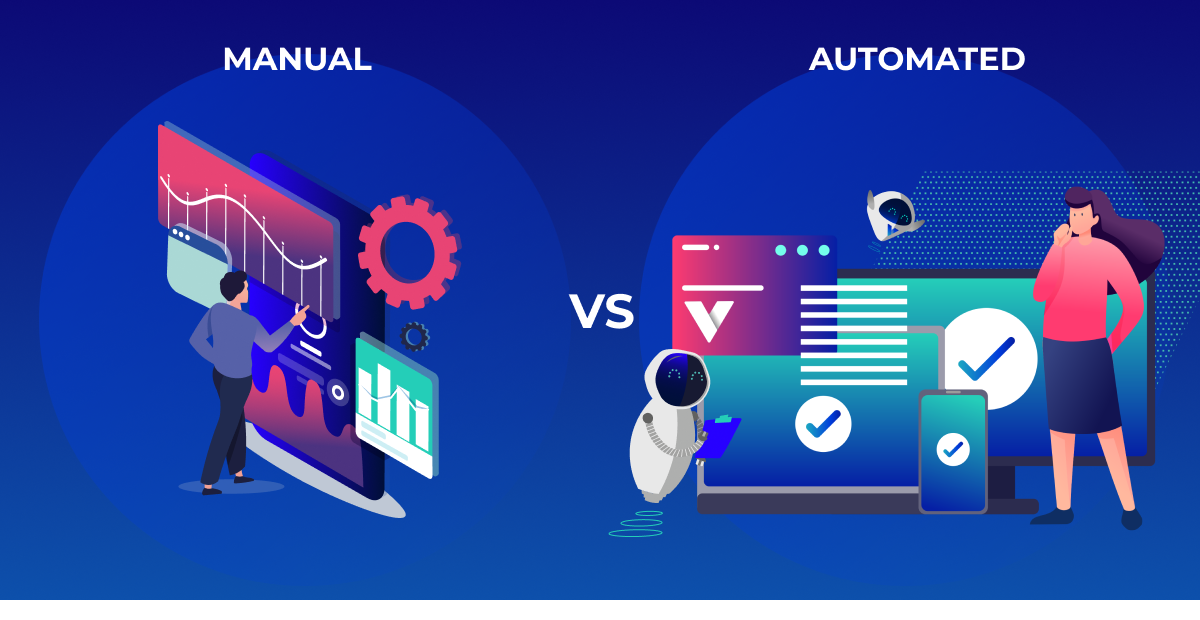 Read a discussion of the pros and cons of both automated and manual testing here.

An automated testing software writing an unbiased article on the merits of manual vs automated testing? Yeah, right. No, really! Scout’s honor, this post sets out to discuss the pros and cons of both types of testing.

Manual testing can be a rather repetitive and mind-numbing process. In manual testing, the QA analyst goes through all the steps themselves, clicking on all the buttons, entering details, and checking all combinations themselves. And then once the tests are all done… they have to start all over! Websites can encounter a lot of problems and there are lots of types of bugs that can crop up between testing. So depending on the complexity of the website, as soon as the first round of testing is finished, the next one has to begin. However, there are a couple of plusses. Instead of taking the time to code the tests (but there at least needs to be an outline required so the tester knows what to do), the tester can just jump in and begin. It can also provide a more accurate user experience since it’s a human that is going through to make sure everything is worked properly and is intuitive. However, this also introduces the possibility of human error.

With automated testing, there is no human error (except in the process of writing the code, where there is plenty of debugging that has to happen no matter how experienced the programmer is). The testing can also run continuously, freeing up the tester to focus on more interesting things. However, with traditional automated testing, the code does take a while to set up and debug, and the code has to be actively maintained by the tester. But since the tester builds the code themselves, there is 100% customization and control over exactly what the tests do.

All in all, there are ups and downs to manual and automated testing. Here’s the summary:

- Nothing but testing for the analyst

Let’s take this analysis one step further though (yup, you were expecting this): let’s consider Virtuoso. Virtuoso is a more intelligent form of automated testing, so it has the same pros as normal automated testing. However, it eliminates all the cons. Where a programmer would have to debug their tests, Virtuoso can direct the user straight to the issue and show a screenshot of the problem for easy fixing. And this is just when the test is being set up. Virtuoso also obliterates test maintenance through the self-healing feature. Once you’ve authored a test, you can sit back and let it run without having to think about it. And don’t even worry about test authoring times! With Virtuoso, you can author plain English tests 9x faster since our software intuitively knows what you want and you don’t have to deal with complicated strings of code. So, are you convinced yet? Schedule a demo with us to see Virtuoso in action!