The Journey to Full Test Automation 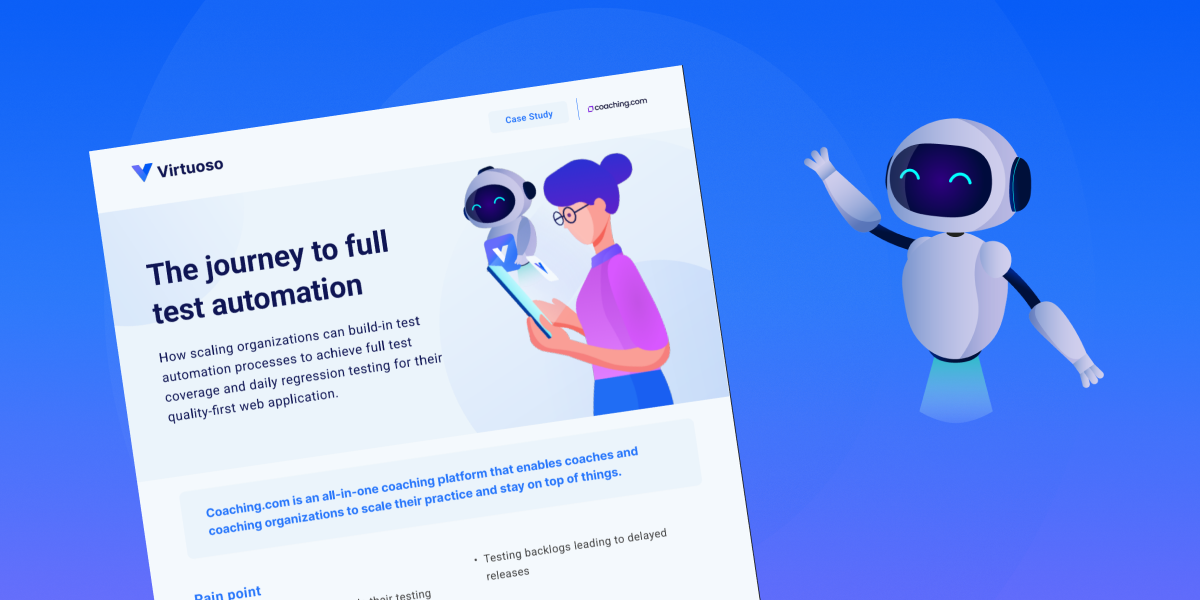 Coaching.com is a leading platform that helps coaches, coaching companies, and organizations worldwide schedule and manage their coaching practices. Read about their journey to full test automation.

Coaching.com is an all-in-one coaching platform for scheduling engagements, managing invoices and payments, processing client feedback, and more to enable coaches to scale their practice and stay on top of things. See how scaling organizations like Coaching.com can successfully build in test automation processes to achieve full test coverage and daily regression testing for their quality-first web application.

“Using Virtuoso has created tremendous efficiencies at Coaching.com! Before using the platform, we performed a lot of time-consuming manual testing. Once we started running automated tests we felt a huge sense of relief knowing that Virtuoso was testing our core functionality. This enhanced our platform’s reliability and allowed us to focus on building new features.”
- Gina Cross, QA & Product

Coaching.com struggled to scale their testing as the amount of processes and workflows under test grew exponentially. A shortage of resources paired with usability constraints across the application meant that bottlenecks in testing and limited test coverage were commonplace in their quality assurance process. They were in need of a comprehensive solution that would help expand their regression testing, provide their QA team with a structured testing process, and assure automation of intensive manual testing practices.

Coaching.com was able to automate testing across 19 major workflows that include more than 150 end-to-end processes.

By embracing Virtuoso as the vehicle to perform quality-first test automation for their web application, Coaching.com were able to eliminate issues such as slow and manual testing, ineffective regression testing, and usability testing constraints. They now enjoy full testing coverage across the majority of their core application workflows and continue to use Virtuoso to expand regression testing into less prominent parts of their application.

This digital transformation was made possible by Virtuoso’s intelligent automation features including authoring tests in plain English and executing journeys in parallel for any processes and workflows, whether live or in production. Virtuoso capabilities such as self-healing tests that utilize probability-driven algorithms to catch changes were utilized, along with snapshot captures that ensure tests catch every visual regression, every time

Coaching.com’s testers have benefitted from learning new test automation skills and continue to work alongside Virtuoso’s customer support and engineering teams to find the best solutions for their rapidly-scaling dynamic application that is used by thousands of leading coaches and companies worldwide.

It’s your turn to leverage Virtuoso! Virtuoso’s intelligent automation capabilities are suitable for organizations and enterprises of any size. Book a free demo to see how we can help you automate every step of your testing process.